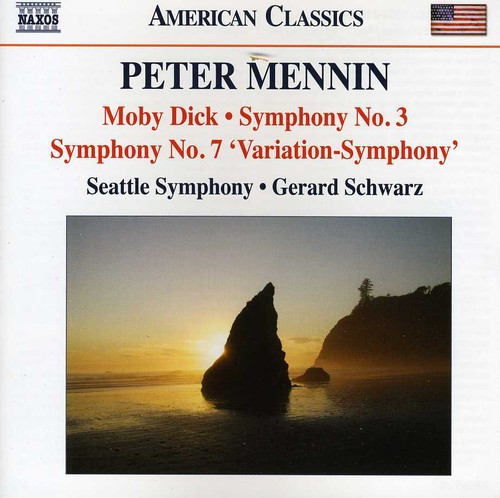 Moby Dick / Symphonies Nos. 3 & 7
Artist: Seattle Symphony
Format: CD
New: Not on Hand, Let us get it for you
Wish

Peter Mennin was a leading member of the school of American symphonic composers who came of age in the 1930 's and 1940 's, a group that includes David Diamond, William Schuman and others. Cast in a traditional design of three movements in a fast-slow-fast pattern, Symphony No. 3 is a work of great contrapuntal energy, percussive accents and propulsive rhythms. The composer described the passionate slow movement as "an extended song... making use of sustained voice-weaving." Symphony No. 7 develops in a single movement of remarkable contrasts and intensity. An exception to Mennin's "pure" compositional approach, the concertato Moby Dick depicts "the emotional impact of the novel as a whole." This recording has been acclaimed as "a fine tribute to an inexplicably neglected figure of the century's American music scene" (Chicago Tribune).