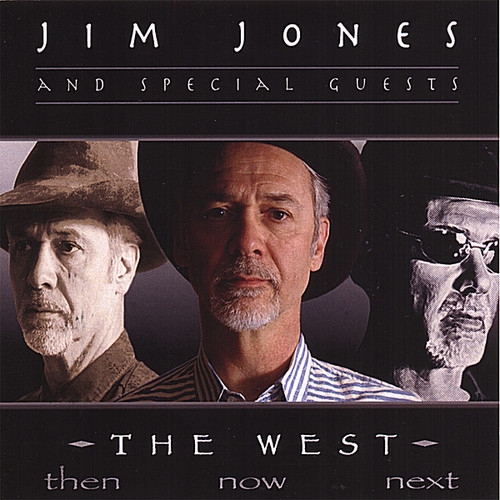 Getting somewhere! It's fair to say that's what 'The West: Then...Now...Next' is really about. The songs concern themselves with different eras of, events from and hopes for our great West. But within each song lies it's own movement...from point launched to point reached, point raised to point made. Originally a concept album stemming from Jim's orientation toward 'reporting' on things Western, our writing took it's own course and other songs magically appeared that fit right in. Jim Jones draws inspiration from many sources, including his desire to provide life lessons and his ingrained respect for doing things the Cowboy Way. However, it's Jim's creativity in crafting his songs and his ability to deliver them that makes his a unique voice in contemporary Western Music. It also makes him great fun to work with! We were proud to have earned a #1 Power Source Western chart song in September '05 with the title tune from our last CD release, and Jim Jones and I are equally proud to offer you his newest in 'The West: Then...Now...Next!' Now let's hope we're all 'getting somewhere' we want to be! Rick Huff, co-producer, Albuquerque, 2006 Jim Jones is a native Texan who headed West to live in New Mexico in 1991. He is a two-time finalist in the prestigious Kerrville Folk Festival New Folk Songwriting Competition and has produced fifteen albums of his own and others' music along with three award-winning children's character education musisc videos. Jim lives in Corrales, New Mexico with his wife, teenage daughter and dog. When not writing, recording or performing music, Jim tries to find as much time as possible for riding horses, fly fishing, skiing and camping.