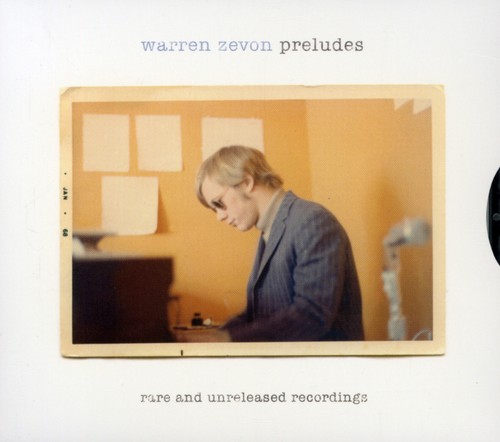 Preludes
Artist: Warren Zevon
Format: CD
New: Not on Hand, Let us get it for you
Wish

Fans of Warren Zevon will now have a chance to learn more about his life and music when a new two-CD set, Preludes: Rare&Unreleased Recordings is released on May 1. Following his death, his son, Jordan Zevon, discovered 126 unreleased outtakes and demos in a piano-sized touring case. The two-CD set collects the best of these recordings.

''Preludes: Rare and Unreleased Recordings'' is a two-CD compilation of music and interviews, including unreleased outtakes and demos, by singer-songwriter Warren Zevon, who died in 2003.

A few months after Zevon's death, his son, Jordan, drove out to one of his father's storage spaces in the San Fernando Valley to begin the process of sorting through old recordings. He discovered over one hundred unreleased outtakes and demos in a piano-sized touring case.

''Preludes'' features sixteen of the newly discovered recordings, including six unreleased tracks: "Empty Hearted Town", "Going All The Way", "Steady Rain", "Stop Rainin' Lord", "Studebaker" and "The Rosarita Beach Café". All of the songs were recorded before 1976. The album also includes previously unreleased versions of "Werewolves of London" and "Accidentally Like A Martyr". The second disc includes a radio interview with Zevon, conducted by Jody Denberg in 2000.

The album was released by New West Records in 2007 in a deluxe two-CD package in a hardbound slipcase. It includes a 44-page booklet with previously unpublished family photos, integrated with excerpts from the memoir ''I'll Sleep When I'm Dead: The Dirty Life and Times of Warren Zevon'' by Crystal Zevon. - Wikipedia