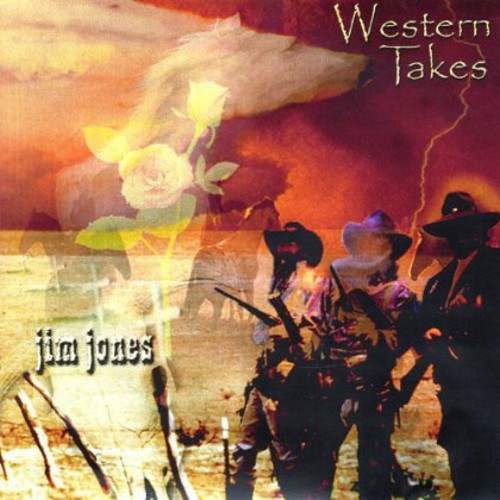 Western Takes
Artist: Jim Jones
Format: CD
New: Not on Hand, Let us get it for you
Wish

Jim Jones is a native Texan who headed West to live in New Mexico in 1991. He is a two-time finalist in the prestigious Kerrville Folk Festival New Folk Songwriter's competition and has produced thirteen albums of his own or others' music as well as the award-winning children's character education music video, 'You're Always Welcome.' In 2002, he'd finally had enough of the smoky country bar scene- hey, even Jimmy Buffet is sick of playing 'Margaritaville'!- and decided to focus on writing, recording and performing his first love- Western music. In late 2002, he released the Western/folk album, 'Breakin' Even,' which was well-received, getting airplay throughout the Southwest. This led to a collaboration on a new album with Rick Huff, producer of the syndicated radio program 'Best of the West Review.' As the album evolved, it became clear that it contained a host of songs with a Western perspective, hence the title, 'Western Takes.' Song topics 'range' from ridin' horses, cowboy love, the rodeo brotherhood, the elements, ghost stories, tradition, heritage, stewardship, land and lore. The album is 'sweetened' with appearances by fellow New Mexican artists Kip Calahan, Susan Clark, Katie Gill and Auge Hays of the Buckarettes and is 'spiced up' with two performances by New Mexico mariachi accordion legend Miguel Romero. If you are a fan of Western stories that carry the tradition into the 21st Centure, you'll like 'Western Takes.'