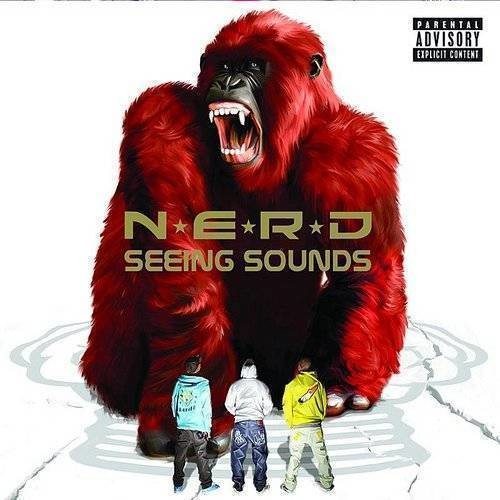 Double vinyl LP pressing. Seeing Sounds is the third studio album by American alternative rock band N.E.R.D released June 10, 2008 on Star Trak Entertainment and Interscope Records in the United States. After ending their contract with Virgin Records in 2005, the band felt their previous album Fly or Die (2004) was too consistent. Using their own money, the band recorded the album in Florida and California. The album was produced solely by record production duo The Neptunes, consisting of Pharrell Williams and Chad Hugo, with additional assistance by rock band Spymob and was mainly written by Williams. The album's title, as well as it's content, revolves around the neurological phenomenon of synesthesia, the mixing of sensory modalities. The album debuted at number seven on the U.S. Billboard 200 chart, selling 80, 000 in it's first week. It peaked in the top 20 in Australia, Canada, the Netherlands, Switzerland and the United Kingdom, while also charting in the several other countries. Upon it's release, Seeing Sounds received generally mixed to positive reviews from most music critics. Some writers called the record N.E.R.D's best album to date and praised it's production, while others negatively criticized Williams' singing and the album's lyrical content.