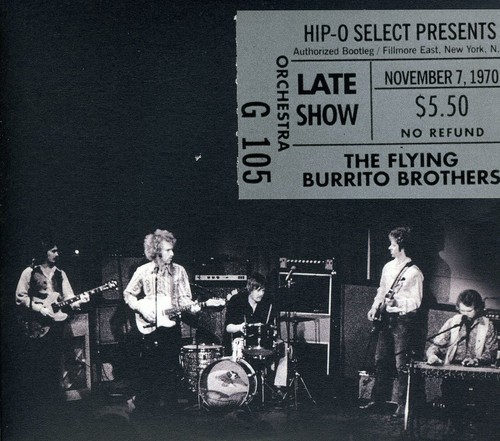 In the short and storied lifespan of the original FBB, the Los Angeles based band was one of the musical building blocks upon which an entire Country-Rock genre was built. Formed by Chris Hillman and Gram Parsons when they left the Byrds, the Burritos quickly became known for their great songwriting, heartfelt vocals, spangled Nudie suits and a parade of personnel changes. The Flying Burrito Brothers on this wonderful concert disc could essentially be called Version 2. Gram Parsons and original bassist Chris Ehtridge had left and were replaced by singer/songwriter Rick Roberts and future Eagle Bernie Leadon. Former Byrd, Michael Clarke is on drums and famed session steel player "Sneaky" Pete Kleinow is on pedal steel. Combining rock drive and a distinctly country feel, the band romps through a set consisting of originals drawn from the Burritos two albums to date, the Byrds, a Mick Jagger-Keith Richards composition, a classic R&B mover and a great C&W road song. This is Country-Rock at it's infancy, but also at it's best.