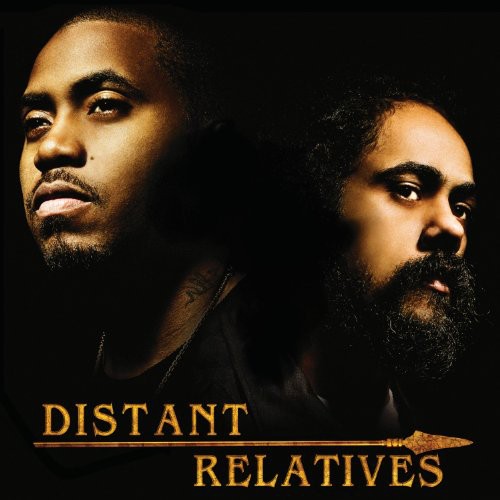 Distant Relatives
Artist: Nas & Damian "Jr. Gong" Marley
Format: CD
New: Not on Hand, Let us get it for you
Wish

International Hip Hop superstar Nas and Grammy-winning artist Damian "Jr. Gong" Marley join creative forces to release this highly anticipated and exciting 2010 collaboration. This is an album created by the two serious artists to explore and celebrate the correlations and deep-rooted connections between reggae and Hip Hop, tracing both sounds back to the African motherland that is both the cradle of humanity and the wellspring of mankind's music. The project features the signature instrumentation and musicianship of Marley with the hard-hitting beats and lyrics of Nas. Distant Relatives traces the direct line from Dancehall Reggae's breakthrough moment 40 years ago to the rise of Hip Hop several years later.

''Distant Relatives'' is a collaborative studio album by American rapper Nas and Jamaican reggae artist Damian Marley, released May 18, 2010, on Universal Republic and Def Jam Recordings. Production for the album took place during 2008 to 2010 and was handled primarily by Damian Marley and Stephen Marley. Fusing musical elements of hip hop and reggae, ''Distant Relatives'' features lyrical themes concerning ancestry, poverty, and the plight of Africa.

The album debuted at number five on the US ''Billboard'' 200 chart, selling 57,000 copies in its first week. Upon its release, ''Distant Relatives'' received generally positive reviews from most music critics. - Wikipedia