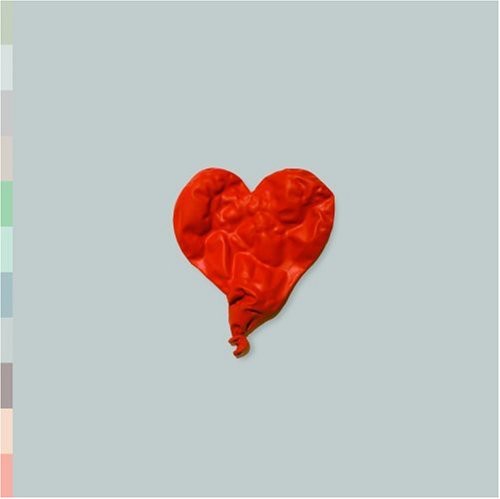 Kanye West, the ten-time Grammy-winning musical phenomenon, rapper, producer and now singer, embarks on a new musical journey taking his audience to new heights. Kanye returns with his fourth album, 808s&Heartbreak, featuring the heart-pounding first single"Love Lockdown.""Heartless,"the second single, is next up to hit the airwaves.

''808s & Heartbreak'' is the fourth studio album by American hip hop artist Kanye West, released November 24, 2008 on Roc-A-Fella Records in the United States. Recording sessions for the album took place at Glenwood Studios in Burbank, California and Avex Recording Studio in Honolulu, Hawaii during September to October 2008. It was primarily produced by West, No I.D., and Jeff Bhasker. Conceived in the wake of multiple events that affected and distressed him during the previous year, ''808's & Heartbreak'' marked a major musical departure for Kanye West from his previous work, lyrically, vocally, and production-wise.

Classified by West as a pop album, ''808s & Heartbreak'' incorporates elements of synthpop, electronica, R&B, and electropop, while its tracks are primarily sung rather than rapped by West and contain lyrical themes such as love, loneliness, and heartache. The album also contains a predominant use of the Auto-Tune voice processor and the Roland TR-808 drum machine, which was utilized and manipulated by West to produce a distorted, electronic sound. Approaching the album's production in a minimalist fashion, West intended to contravene the typical sound of hip hop beat and instead evoke a presence of tribal drums.

The album debuted at number one on the U.S. ''Billboard'' 200 chart, selling 450,145 copies in its first week, and it produced four singles that attained ''Billboard'' chart success. ''808s & Heartbreak'' became his fourth album to sell 1 million copies in the United States and was certified platinum in sales by the Recording Industry Association of America. Despite a divided reaction from music audiences towards West's stylistic change, the album received generally positive reviews from most music critics upon its release. In 2009, ''Rolling Stone'' magazine named it the sixty-third best album of the 2000s decade. - Wikipedia

Here we go again. Kanye’s going to release another LP of "pop art" that, despite all the commercial and critical acclaim in the world, won’t be enough to satiate his massive ego. Yet, next to 50 Cent, the man he vanquished in a memorable chart battle last September, Kanye’s the good guy. Instead of bitching more, we’ll just say that "Love Lockdown," debuted live on the VMAs, is an intriguing and soulful left turn for the never predictable Chicagoan.
This website uses cookies to personalize content and analyse traffic in order to offer you a better experience.
I accept Learn More
back to top