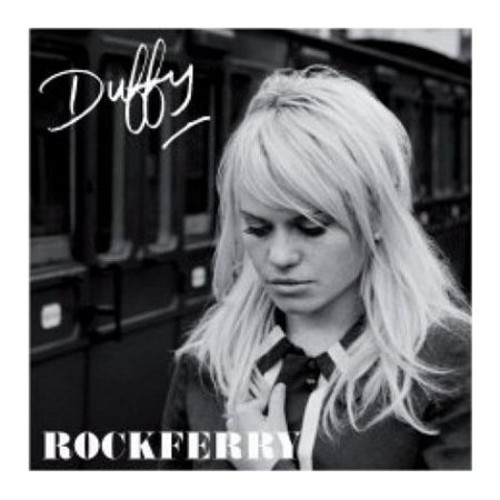 Rockferry
Artist: Duffy
Format: CD
New: Not on Hand, Let us see if we can get it for you!
Wish

The most hotly anticipated album release of this New Year, ROCKFERRY is the debut album of Welsh singer/songwriter Duffy. Welsh songbird, Duffy, came to the attention of Rough Trade Management in 2004. Rough Trade pointed Duffy in the direction of guitarist/producer Bernard Butler (Suede/The Tears/McAlmont & Butler). Duffy spent the next couple years honing and developing her songwriting skills all the while discovering hidden musical gems that inspired her. The fruits of her intense labor is this magnificent album, a masterclass in mature, resonant Pop. Features 10 tracks including the first single "Mercy."

''Rockferry'' is the debut studio album by Welsh singer Duffy released on 3 March 2008. The album was the fourth best selling album of 2008 worldwide.

Prior to releasing the album, Duffy appeared twice on Jools Holland's music show, performing the tracks "Mercy", "Warwick Avenue" and her version of "The First Cut Is the Deepest". The album title ''Rockferry'', according to Duffy, is loosely based on Rock Ferry, a suburb of Birkenhead, on the Wirral Peninsula and approximately ten miles from the Welsh border and three miles from Liverpool. The album art and video for the title track were shot on and around the Ffestiniog Railway in Porthmadog, which was renamed 'Rockferry' for the occasion. The timing of the photoshoot was somewhat before the release of the album, when Duffy was still a relatively unknown performer.

The album won a Grammy Award for Best Pop Vocal Album at the 51st Annual Grammy Awards, which were presented 8 February 2009. ''Rockferry'' was ranked number 30th on Rolling Stone magazine's list of the Best Albums of 2008. At the end of 2008, Q named the album the 6<sup>th</sup> best album of 2008 and Mojo named it the 31<sup>st</sup> best album of 2008. ''Rockferry'' also received the award for ''Mastercard British Album'' at the 2009 BRIT Awards, in a night that saw Duffy take home three awards. The album was the 4th biggest selling of 2008 in the world, as according to the IFPI, as well as being the biggest selling of the UK.

The album is considered a commercial success, especially in the UK, where it was at number four a full year after its release, spending most of them in the top ten albums, and a significant amount in the top three. - Wikipedia