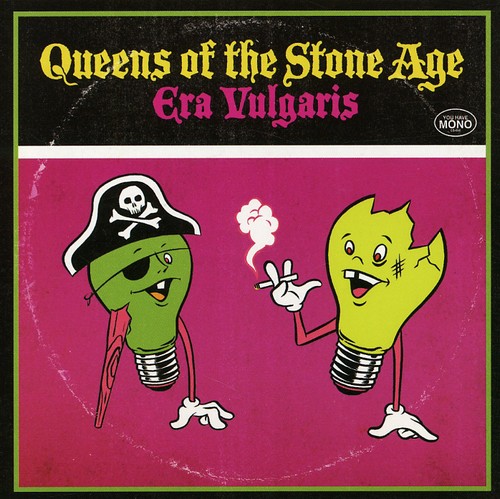 Era Vulgaris
Artist: Queens Of The Stone Age
Format: CD
New: Not on Hand, Let us get it for you
Wish

Era Vulgaris translates to the Common Era, but there is nothing common about the latest album from Queens of the Stone Age. Josh Homme's band of gypsies return with their fifth full-length release and they are out for blood with guitars slung low.

''Era Vulgaris'' is the fifth full length studio album by American hard rock band Queens of the Stone Age. The album was completed in early April 2007 and released on June 8, 2007 in some countries, June 11, 2007 in the United Kingdom and June 12, 2007 in the United States. The tracks "Sick, Sick, Sick" and "3's & 7's" were released as singles in early June, with a third single "Make It wit Chu" released around Halloween of 2007.

The album debuted at number fourteen on the U.S. ''Billboard'' 200 charts selling 52,000 copies in its first week, which was a decline in comparison to the previous album, which opened at number 5 with 91,000 copies sold in its debut week. In other countries it has reached much loftier debut positions, mostly in the top ten, such as number five in Canada where it sold approximately 10,000 copies in its opening week. - Wikipedia

Songs for the Deaf was so triumphant and righteous that we really should've seen the backlash to Lullabies to Paralyze coming (although it did necessitate Will Ferrell delivering More Cowbell during their SNL performance of "Little Sister"). For album numero cinco, QOTSA are busting out guest stars both familiar (Mark Lanegan, Billy Gibbons) and peculiar (Julian Casablancas, Trent Reznor). Expect robo-psychedelia of the highest order. And some super cheesy videos.
This website uses cookies to personalize content and analyse traffic in order to offer you a better experience.
I accept Learn More
back to top