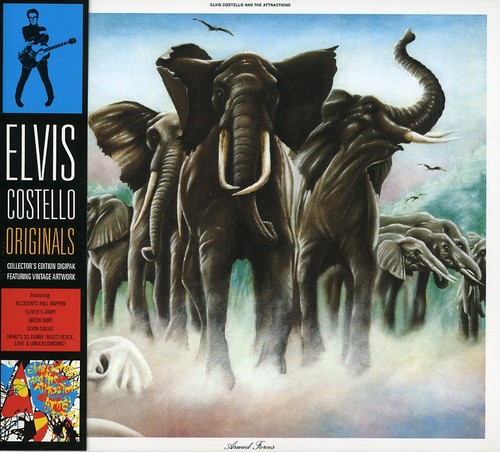 Under the influence of Krautrock and ABBA, Costello crafted this 1979 new wave masterpiece including such classics as Oliver's Army and Accidents Will Happen.

''Armed Forces'' is Elvis Costello's third album, his second with the Attractions, and the first to officially credit the Attractions on the cover. It was released in the UK by Radar Records and in the U.S. by Columbia in 1979 (see 1979 in music). The American version deleted "Sunday's Best" and substituted Costello's version of "(What's So Funny 'Bout) Peace, Love, and Understanding," which had been released the previous November as the B-side of Nick Lowe's "American Squirm" single, at the end of side two. The album originally had the working title ''Emotional Fascism''.

Initial pressings of the album in the UK and U.S. included a promotional three-song single, ''Live at Hollywood High'', which was recorded on . The live tracks, also produced by Nick Lowe, are "Accidents Will Happen," "Alison," and "Watching the Detectives". The UK edition also included 4 postcards featuring pictures of the band.