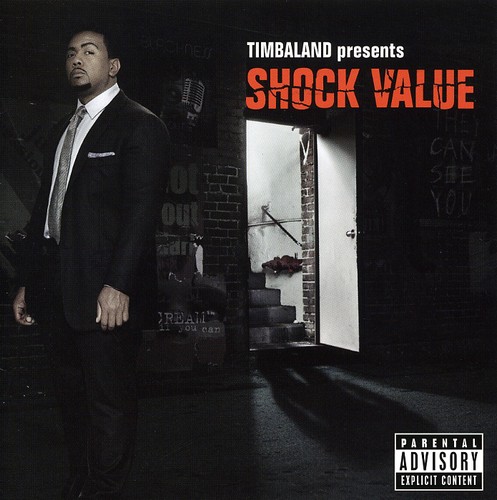 Timbaland Presents Shock Value
Artist: Timbaland
Format: CD
New: Not on Hand, Let us get it for you
Wish

Timbaland Presents Shock Value features the first single,"Give It To Me,"featuring Justin Timberlake and Nelly Furtado."My mission is to blow up the boundaries and tear down the limits,"says Timbaland."I'm taking my music outside of the box. I'm not getting away from what I'm known for; I'm just going to a place where it's all about the music, not about the labels on the music. That's why I call it Shock Value--from the artists to the production, it will shock the system."

On an album with frequent flyer guest stars Missy Elliott and Justin Timberlake, there honestly ain't much in the way of shock value.(Unless you count the guns that suddenly pumped-up Timba has been boasting lately, evidently in an effort to beat out Dr. Dre for the Over the Top remake). We don't really require surprises from Timbaland, though'"just frigid club bangers, which is why the JT/Nelly Furtado stuff works better than the rock collabos (Fall Out Boy, She Wants Revenge). Missy's former right-hand man joined forces with Justin Timberlake on last year's megahit FutureSex/LoveSounds, capping off a decade of chart dominance. Although he still can't dance, Timba's striking out solo for the first time in a decade, boasting guests from JT and Nelly Furtado to the Hives and She Wants Revenge.
This website uses cookies to personalize content and analyse traffic in order to offer you a better experience.
I accept Learn More
back to top