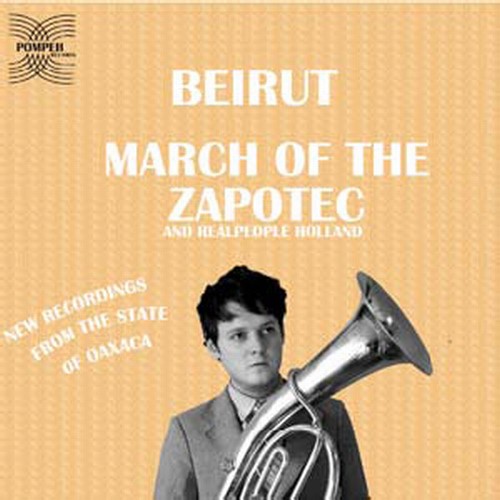 March Of The Zapotec
Artist: Beirut
Format: CD
New: Not on Hand, Let us get it for you
Wish

Together, this album-length double release represents the totality of Condon's work over the past year. March of the Zapotec is further testament toward the inventiveness and intimacy he creates as Beirut, a band which started as one person sounding like twelve, and has developed into a particular style and sound.

For the past year, Beirut has alternated between touring in support of 2007's much-lauded The Flying Club Cup and writing a wealth of new material. With no sense of a release in mind, bandleader Zach Condon recorded in any style that struck his fancy. Some early discussions about recording material for a film being shot in Mexico morphed into a new idea: What about finding a local band in a small city in Mexico, hiring them to play some new material, and recording the result?

It was a sincere challenge every step of the way. Condon had to find the band, which he did through a bandmate's mother who has connections in Oaxaca. To communicate with the performers, he hired a translator, who had to be able to speak English, Spanish, as well as Zapotec, the band members' native language. From there, he flew down to Oaxaca, traveling a half-hour out of town to the tiny weaver village of Teotitlan del Valle, where he met the nineteen members of The Jimenez Band. The ensuing weeks of recording, rewriting, and relating are documented in a series of short films (to be released online as the release date for March of the Zapotec draws near).

All well and good, but the six songs found on March of the Zapotec are only a part of what this release has become. Before recording as Beirut, Condon went by Realpeople for his bedroom recordings, and he has revived the name for the second half in this collection, Holland. As opposed to March of the Zapotec, Holland collects a series of songs conceived and completed at home. One song, Venice, appeared on a compilation by The Believer magazine, while My Night with the Prostitute from Marseille was on the Big Change digital-only charity compilation on iTunes.

Together, this album-length double release represents the totality of Condon's work over the past year. March of the Zapotec is further testament toward the inventiveness and intimacy he creates as Beirut, a band which started as one person sounding like twelve, and has developed into a particular style and sound. No matter what inspirations jumpstart any one particular song, underlying it all is the realization that Condon is a singular artist creating an original sound. What may appear at first to be two disparate paths are in reality joined by Condon's ability to craft simple melodies that sound both unique and unforgettable. It would be a misconception for Beirut's sound to be considered a dabble in various styles, folk sounds, and music histories, because one could never confuse Condon's music for the original inspiration; all his songs on this release carry more in common with each other than they do their original source of inspiration. And whether he's being inspired by Balkan folk, French chanteuse, Mexican troubadour, '80s synth pop, or '90s house, the common thread remains Condon's ability to personalize the sound.

March of the Zapotec marks the continuing emergence of a musician who has only shown an inkling of where he is headed. And while the road may be long, every stop along the way invites a new experience. Enjoy the latest.