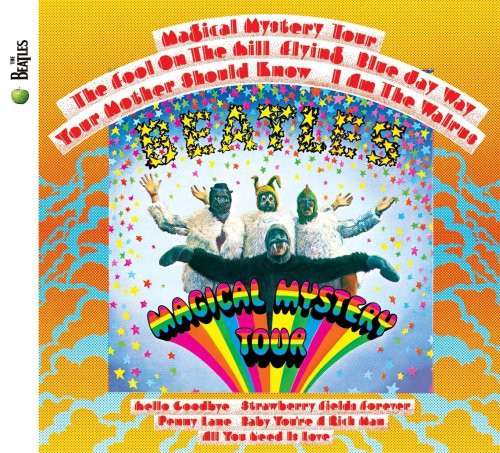 The first six songs on MAGICAL MYSTERY TOUR were the soundtrack to the Beatles' TV movie of the same name. The film was an experimental mess, but the experimental pop of the album included some of their most memorable productions. The soundtrack side was dominated by Paul McCartney pop tunes, including the bittersweet piano ballad "Fool On The Hill" and "Your Mother Should Know," an impossibly catchy bit of Vaudevillian pop. But it also featured George Harrison's mystical "Blue Jay Way" (about his house in Hollywood) and John Lennon's "I Am The Walrus," which wedded a stream-of-consciousness lyric to a fierce drum beat, layers of strings, odd voices and some dialogue from Shakespeare's "King Lear." McCartney's "Hello Goodbye," which led off the assorted singles, featured some neatly arranged contrapuntal vocals, and may well have been about the dissolving partnerships (songwriting and otherwise) between McCartney and Lennon. Lennon's strangely arranged "Strawberry Fields Forever," whose two halves blend different takes of the same song, one slowed down to match the pitch of the other, was a trippy reverie; its bridges, orchestrated with horns, cellos, and backward cymbals, are sheer brilliance. "Penny Lane," a wistful fantasy featuring a beautiful trumpet solo, was McCartney at his melodic best, the AM foil to Lennon's FM headiness.