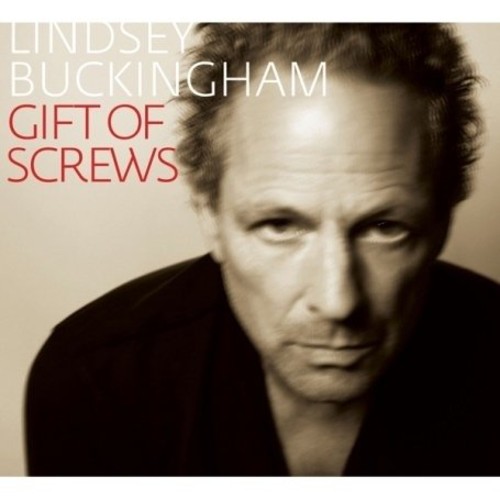 Gift of Screws
Artist: Lindsey Buckingham
Format: CD
New: Not on Hand, Let us get it for you
Wish

Fleetwood Mac's Lindsey Buckingham will release his fifth solo album 'Gift of Screws' on September 15th on Reprise. The album is his first since 2006's acoustically focused 'Under the Skin'. Primarily recorded and self-produced at his home studio and on the road during the 'Under the Skin' tour, the album also features two songs co-produced by Rob Cavallo (Green Day, My Chemical Romance). Mixing the immediacy of the best of his contributions to Fleetwood Mac with experimental production flourishes, highlights of the set include 'Bel Air Rain', 'Time Precious Time', 'Underground, 'Love Runs Deeper' and 'Treason'. "You could certainly say this album is a distillation of a number periods of time, some false starts to make albums, certainly some songs that go back a number of years, that took a while to find a home here, combined with brand-new songs and a whole other outlook," explains Buckingham. "And the fact that there was a kind of tenacity and focus to want to bring all of this together in one place. The fact that as an artist I'm still, for better or worse, clinging to my idealism and to my sense that there is still yet much to be said. This is a culmination of that." "The first one was more of a boutique kind of album," he adds by way of comparing 'Under the Skin' with 'Gift of Screws'. "It's almost like the opening act and then the headline act in terms of the kind of approach. Here I'm bringing to bear many more aspects of what I can do - guitar solos, just rocking a lot more in addition to the other things. It does rock more! And they do seem to complement each other." the album also features the unmistakable sound of the Fleetwood Mac rhythm section, as John McVie and Mick Fleetwood contribute to several songs including the title-track and 'Wait for You'.