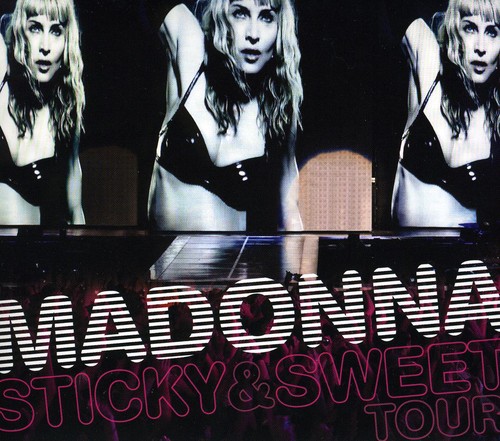 Sticky & Sweet Tour
Artist: Madonna
Format: CD
New: Not on Hand, Let us get it for you
Wish

Madonna's most recent stage extravaganza, the 'Sticky & Sweet' concert, will be released on April 6th, it was announced today by Live Nation, the world s largest live music company. 'Sticky & Sweet', which was produced by Live Nation, was the most successful tour by a solo artist in history and was seen by over 3.5 million fans in 32 countries around the world. The show, which will be distributed by Warner Bros Records, will be available on DVD, Blu-Ray and CD and will include many of the Material Girls hits from the course of her unprecedented career including, '4 Minutes,' 'Like a Prayer, 'Hung Up' and 'Ray of Light'. Filmed in Buenos Aires, over four days to a crowd exceeding 256,000 fans, the concert also includes a show stopping moment when Madonna performs a historic 'Don't Cry For Me Argentina' to a thunderous audience response from her Argentine fans. Also included are several hits from the multi-Grammy winners most recent CD 'Hard Candy' which debuted at No. 1 in 37 countries. The DVD also includes 30 minutes of exclusive footage filmed behind the scenes during the course of the tour. 'Part concert, part block party and all fun, there is still only one Madonna,' raved the Oakland Press in their review of the 'Sticky & Sweet' Tour. 'A night of triumph and defiance... A two hour multi-media juggernaut,' glowed the LA Times. 'Our lady of perpetual motion...This may be the best tour shes ever stitched together,' claimed the NY Post. -DVD and Blu-Ray include the full live show from Buenos Aries as well as exclusive footage filmed behind the scenes during the course of the tour. -CD includes 13 live songs from the tour.