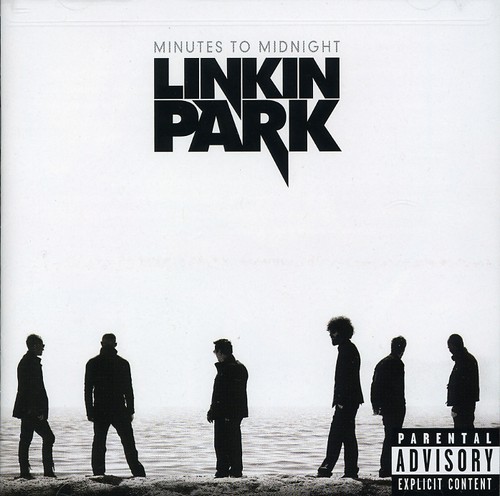 Minutes to Midnight is rock's most anticipated album of the year. This album redefines one of today's most adventurous, accomplished and acclaimed bands.

''Minutes to Midnight'' is the third studio album by American rock band Linkin Park. Released on May 14, 2007, through Warner Bros. Records, the album debuted at number one in the United States and in 15 other countries, including the United Kingdom and Canada. The album was produced by Mike Shinoda and Rick Rubin.

Linkin Park started work on their third studio album which begun in 2003. However, while touring to support ''Meteora'' in 2004 before the project was resumed later, they postponed work on it. Mike Shinoda formed Fort Minor, while Chester Bennington formed Dead by Sunrise. They returned to working on the record, as they have Rick Rubin produce it with Shinoda. They took on a different musical direction afterward. A few unrevealed-to-the-public mistakes occurred while recording the album, postponing it to several dates. Within mixing the album, some touches were added. After artwork and the rest of it was complete they decided to release "What I've Done" as its lead single by April 2007. It was finally released in North America on May 15, 2007.

In the United States, the album had the biggest first week sales of 2007 at the time, with 625,000 albums sold, going on to be certified double platinum in the United States, New Zealand, Italy, Ireland, and Australia and certified platinum in Canada, France, Switzerland and in the UK. Despite its commercial success, ''Minutes to Midnight'' received mixed reviews from critics. ''Rolling Stone'' magazine named it the twenty-fifth best album of 2007. It was ranked #154 on ''Billboards ''Hot 200 Albums of the Decade''. - Wikipedia

There are nearly 150 guilty parties on Wikipedia's "List of Nu Metal Bands" page, maybe five to seven of which you still hear about with any regularity today. Take Korn, Disturbed and System of a Down out of the equation and the rest combined probably wouldn't match Linkin Park's SoundScan numbers, a gaudy 40 million and counting. Of course, Linkin Park aren't really a nu-metal band anymore. No, the casual listener wouldn't know any different from Midnight's first two singles, the self-eviscerating "What I've Done" or the (admittedly novel) revival-hop of "Bleed It Out," but the majority of the album is comprised of plaintive, mid-tempo rock that's much harder to define. It's nice to see some (relatively) subtle political thought from the sextet, be it anti-Dubya invective "No More Sorrow" or remorseful album closing epic "The Little Things Give You Away." The LP have as strong a hold on the zeitgeist as Billy Corgan ever did, and show no signs of relinquishing it. Hubris! We love it! Especially when it's ill-founded. Remember last year when the Killers were all "We've written the best rock record of the last 20 years" and everybody else was all "Nuh-uh," and they were all "Have so" and we were all "Get real"? While Linkin Park aren't quite that cocky, they're coming out of the box for album number three armed with again-ubiquitous production heavy Rick Rubin, a more mature/less screamy take on their template via first single "What I've Done," and a complementary video besotted with enough images of decay and tragedy to qualify as a sequel to Nine Inch Nails' "Hurt." It all adds up to the most "important" work of their career, according to the nu-metal sextet, who seem driven to expunge both the "nu" and "metal" from their resume'"without adjusting the (mis)spelling of their moniker. Can they succeed? You know Jay-Z is pulling for them, so you might as well too.