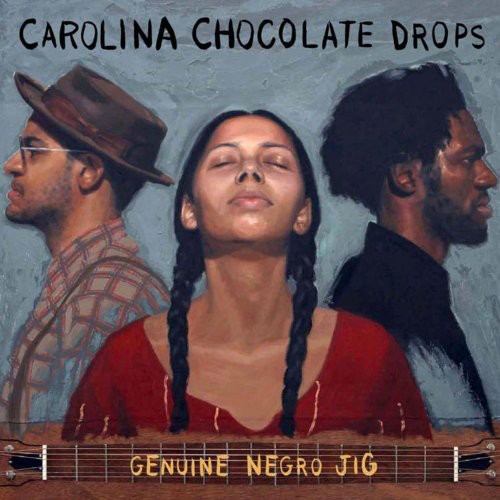 Genuine Negro Jig
Artist: Carolina Chocolate Drops
Format: CD
New: Not on Hand, Let us see if we can get it for you!
Wish

"It will do your heart good, do your spirits good, do your life good to come out and check them out and see this joyous music." Taj Mahal on NPR's Morning Edition, talking about The Carolina Chocolate Drops The Carolina Chocolate Drops are as much about revelation as revival. On it's Nonesuch debut, Genuine Negro Jig, the trio brings exuberance, humor, virtuosity and an infectious acoustic groove to it's exploration of a near-forgotten brand of banjo-driven string-band music originating more than a century ago in the foothills of North Carolina, the Piedmont region where band members Rhiannon Giddens and Justin Robinson were raised. In this rural area, musicians, both black and white, once shared and swapped tunes. Over the decades, the importance of the African-American role in string-band music was diminished, it's sound and significance co-opted by minstrel shows and segregated by record labels. CCD under the tutelage of nonagenarian fiddler player Joe Thompson, one of the last surviving Piedmont musicians have reclaimed the old time songs, making them vital and fresh for right now, reasserting in the process the African roots of the banjo. The Carolina Chocolate Drops have won over crowds at the Newport Folk Festival, on such National Public Radio shows as Mountain Stage and a Prairie Home Companion, and on tours through Europe. Denzel Washington personally selected the trio to appear in his critically acclaimed 2007 directorial effort, the Great Debaters. In a review of a CCD Kennedy Center performance, the Washington Post declared, "Their set was anything but academic... these instrument-swapping residents of Durham, N.C., kept the audience active with speedy strumming, jug-blowing and percussion via carved hand-held bones and foot-banging syncopation." the Boston Globe concurred: "The acoustic trio - banjo, fiddle, guitar managed the minor miracle of evoking a sepia- drenched era of mountain music... Giddens, Robinson and Dom Flemons, all multi- instrumentalists and vocalists, conveyed their deep knowledge with a sense of reverence and studied antiquity- including their simple, era-appropriate costumes and a contagious, abundant joy." After two self-recorded independent releases, CCD chose to work with producer Joe Henry on Genuine Negro Jig. As with his production on Allen Toussaint's the Bright Mississippi, Henry emphasizes simplicity, clarity, interaction; with it's striking lack of studio frills, the emphasis is on the spirit of these performances, which are often as intense as they are exhilarating. Uptempo numbers like live-show favorite "Cornbread and Butterbeans" and "Sandy Boys" are immediate standouts, though slow-burning, moody tracks like "Kissin' and Cussin'" and "Snowden's Jig (Genuine Negro Jig)" prove to be downright haunting. The versatile Giddens performs the Celtic-style balladry of "Reynadine" acapella; she's equally convincing taking lead on a brilliant recasting of the 2001 Blu Cantrell R&B-dance hit, "Hit 'Em Up Style " Genuine Negro Jig starts out with the specific but winds up with the universal; this is music that has literally traveled continents and centuries to achieve a brand new relevance, a shared history still in the making.
This website uses cookies to personalize content and analyse traffic in order to offer you a better experience.
I accept Learn More
back to top