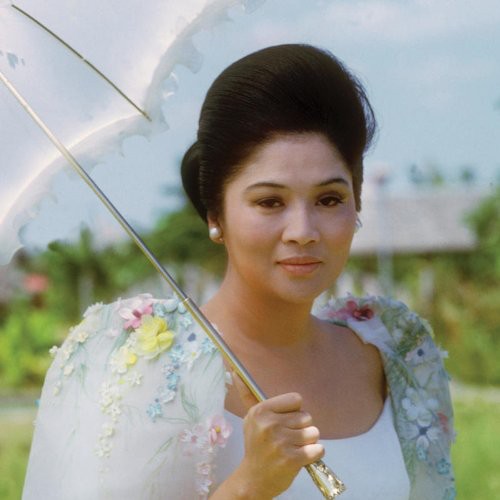 Here Lies Love
Artist: David Byrne & Fatboy Slim
Format: CD
New: Not on Hand, Let us get it for you
Wish

'Here Lies Love' is a 22 song double-disc song cycle - improbably poignant, decidedly surreal, surprisingly thought provoking - about the rise and fall of the Philippines' notorious Imelda Marcos. It was conceived by David Byrne; composed by Byrne and British deejay/recording artist Fatboy Slim, a/k/a Norman Cook; and performed by a dream cast drawn from the worlds of indie rock, alt country, R&B and pop.

Byrne's taste in collaborators is as imaginative as it is impeccable, including Cyndi Lauper (who recounts, to lighthearted disco beats, Imelda's courtship with Ferdinand Marcos), Steve Earle (as the power-hungry Ferdinand), Dap-Kings vocalist Sharon Jones (recalling Imelda's introduction into New York society) and Natalie Merchant (as spurned Imelda confidante Estrella, anticipating the onset of martial law). Along with vocals turns from such stars as Tori Amos and the B-52's Kate Pierson, Byrne works with rising indie rockers St. Vincent and My Brightest Diamond; New York chanteuses Nellie McKay and Martha Wainwright; and dance-music divas Roisin Murphy and Santigold. Byrne himself appears as the voice of imperialistic America on 'American Troglodyte' a send-up that wouldn't have seemed out of places in Talking Heads' True Stories.

Byrne originally envisioned this as a musical theatre piece, to be mounted in disco and nightclub settings, reflecting the globe-trotting Marcos' taste for such velvet-roped spots as Studio 54 and Regine's. In 2006, he performed work-in-progress versions to enthusiastic audiences at New York City's Carnegie Hall and the Adelaide Festival in Australia. When more funding for a theatrical version proved elusive, While plans for a U.S. theatrical production continue to evolve, he has delivered this unique recording. 'Here Lies Love' has an effervescent disco feel, redolent of Fatboy Slim's own dance-floor anthems, with warm undercurrents of the Latin rhythms that have percolated through Byrne's recent solo work. The sunny arrangements act in counterpoint to the reality of the Marcos' increasingly repressive regime, reflecting the imagined inner life of the glamour-obsessed Imelda. Explains Byrne, 'For me, the darker side of the excesses are, for the most part, a matter of record. A lot of the audience is going to come with that knowledge already. What's more of a challenge is to get inside the head of the person who was behind all of that, and understand what made them tick.' Byrne offers no judgment and avoids the obvious - there is no mention of Imelda's infamous shoe collection.

Many of Byrne's lyrics are, astonishingly enough, constructed from actual Imelda quotes, including the project's title, the words that Imelda, now returned to the Philippines from U.S.-assisted exile in Hawaii, would like to have inscribed on her gravestone. Byrne generously annotates each song in the CD booklet and illustrates the story with archival photos. In a detailed preface, he reveals what drew him to this subject and the bumpy route he took to launch the project and, ultimately, record this CD. The lavish booklet is indeed a page-turner, just as 'Here Lies Love' is a wonderfully old-school album that rewards start-to-finish listening. Once again, Byrne - beloved as musician, thinker and bicyclist-about-town - reveals the breadth and singularity of his vision.