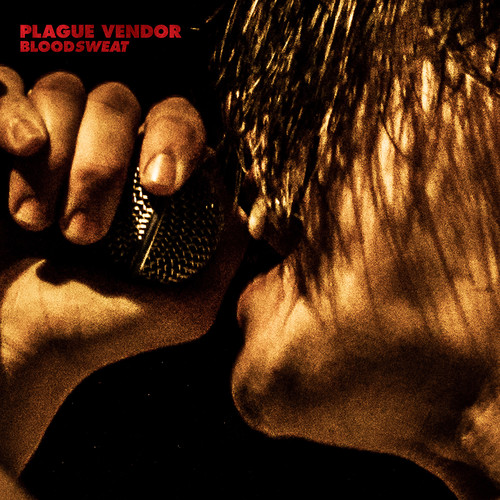 Plague Vendor are back with their new album Bloodsweat, their most powerful and menacing work, and a record that cements the band as the purveyors of dark post-punk in the current scene. Bloodsweat is the much anticipated follow up to Whittier, CA band’s debut album Free to Eat, which was cited by LA Weekly as “punkish dark rock that makes you want to dance and destroy everything around you.”

The songs on Bloodsweat were heavily road-tested before ever making it into the studio. During the recording process, they aimed to capture each track in as few takes as possible, avoiding many overdubs and embracing the same edgy production they bring to their live performances. Add to this the masterful mixing by Alan Moulder, who has mixed iconic records from Royal Blood, Nine Inch Nails, Foals, and The Killers to name a few. Plague Vendor are a fierce live band and the foursome spent the last two years playing endless live shows. At the heart of every show is a frenetic performance by front man Brandon Blaine, who channels The Birthday Party-era Nick Cave. That combined with the musicians’ energy and spirit, the band evokes a foreboding, and very rock ‘n’ roll presence reminiscent of 80s Southern California punk. Bloodsweat captures the intensity of Plague Vendor and you will soon agree with Pitchfork when they say “it f***ing shreds.”