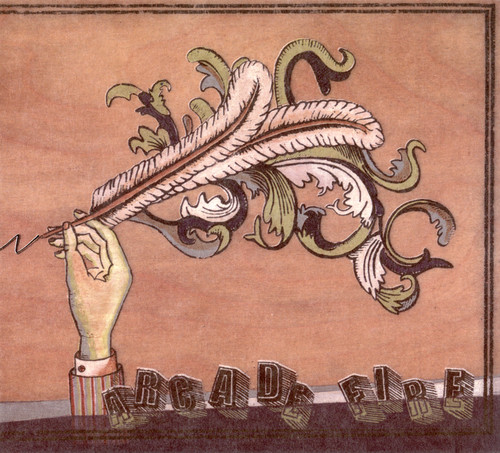 Funeral
Artist: Arcade Fire
Format: CD
New: Not on Hand, Let us get it for you
Wish

Fronted by the husband-and-wife team of Win Butler and RĂ©gine Chassagne, the Arcade Fire's emotional debut - rendered even more poignant by the dedications to recently departed family members contained in it's liner notes - is brave, empowering, and dusted with something that many of the indie-rock genre's more contrived acts desperately lack: an element of real danger. Funeral' s mourners - specifically Butler and Chassagne - inhabit the same post-apocalyptic world as London Suede's Dog Man Star; they are broken, beaten, and ferociously romantic, reveling in the brutal beauty of their surroundings like a heathen Adam & Eve. "Neighborhood #1 (Tunnels)," the first of four metaphorical forays into the geography of the soul, follows a pair of young lovers who meet in the middle of the town through tunnels that connect to their bedrooms. Over a soaring piano lead that's effectively doubled by distorted guitar, they reach a Lord of the Flies-tinged utopia where they can't even remember their names or the faces of their weeping parents. Butler sings like Radiohead's Jonny Greenwood used to play, like a lion-tamer whose whip grows shorter with each and every lash. He can barely contain himself, and when he let's loose it's both melodic and primal, like Berlin-era Bowie or British Sea Power. "Neighborhood #2 (LaĂŻka)" examines suicidal desperation through an angular Gang of Four prism; the hypnotic wash of strings and subtle meter changes of "Neighborhood #4 (7 Kettles)" winsomely capture the mundane doings of day-to-day existence; and "Neighborhood #3 (Power Out)," Funeral's victorious soul-thumping core, is a goose bump-inducing rallying cry centered around the notion that "the power's out in the heart of man, take it from your heart and put it in your hand." the Arcade Fire are not bereft of whimsy. "Crown of Love" is like a wedding cake dropped in slow motion, utilizing a Johnny Mandel-style string section and a sweet, soda-pop stand chorus to provide solace to a jilted lover yearning for a way back into the fold, and "Haiti" relies on a sunny island melody to explore the complexities of Chassagne's mercurial homeland. However, it's the sheer power and scope of cuts like "Wake Up" - featuring all 15 musicians singing in unison - and the mesmerizing, early-Roxy Music pulse of "Rebellion (Lies)" that make Funeral the remarkable achievement that it is. These are songs that pump blood back into the heart as fast and furiously as it's draining from the sleeve on which it beats, and by the time Chassagne dissects her love of riding "In the Backseat" with the radio on, despite her desperate fear of driving, Funeral's singular thread is finally revealed; love does conquer all, especially love for the cathartic power of music.

''Funeral'' is the debut full-length album by Canadian indie rock band Arcade Fire, released on September 14, 2004 in North America by Merge Records and on February 28, 2005 in Europe by Rough Trade Records. It was given its title because several band members had recently lost members of their families: Régine Chassagne's grandmother died in June 2003, Win and William Butler's grandfather (swing musician Alvino Rey) in March 2004, and Richard Reed Parry's aunt in April 2004.

Preliminary recordings for ''Funeral'' were made during the course of a week in August 2003 at the Hotel2Tango in Montreal, Quebec, and the recording was completed later that year.

The album produced five singles. The most successful, "Rebellion (Lies)", peaked at #19 on the UK Singles Chart. The album was nominated for a Grammy Award in 2005 for Best Alternative Music Album. It received wide critical acclaim and topped many year-end and decade-end lists. It was ranked eighth in Bob Mersereau's 2007 book ''The Top 100 Canadian Albums'', #3 on ''Pastes 50 Best Albums of the Decade list, and #2 on Pitchfork's 200 Top Albums of the 2000s. - Wikipedia