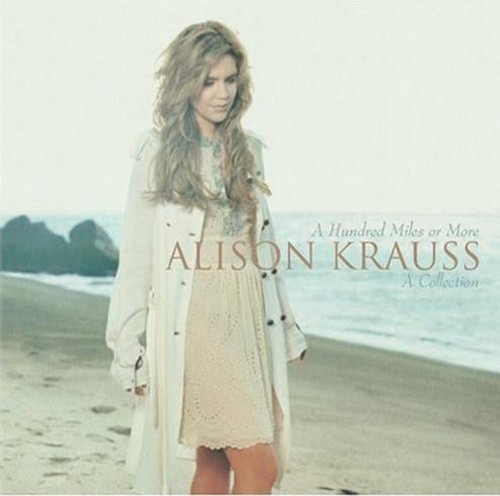 Hundred Miles Or More: A Collection
Artist: Alison Krauss
Format: CD
New: Not on Hand, Let us get it for you
Wish

On April 3rd, Alison Krauss'will release A Hundred Miles or More: A Collection. It's her 12th release for Rounder Records which is comprised of 16 tracks, highlighting Krauss'career of fan favorite collaborations ("Whiskey Lullaby,""How's the World Treating You") and film soundtrack contributions ("Baby Mine,""Down to the River to Pray"). The collection also debuts five new songs.

''A Hundred Miles or More: A Collection'' is a compilation album by country/bluegrass artist Alison Krauss. It was released on April 3, 2007, and is a collection of new and old songs that Krauss has recorded. It features duets with Sting, Brad Paisley, John Waite, and James Taylor. The album debuted and peaked at #10 on the U.S. Billboard 200, and at #3 on the U.S. Top Country Albums, and #38 on the UK Albums Chart.

Two singles were released from the album. The first, a cover of the John Waite song, "Missing You", reached #34 on the Hot Country Songs chart. The second single, "Simple Love", failed to chart. - Wikipedia